After 4 months of care at Wolf Hollow, four young otters were released on the shores of a sheltered bay. They ran along the shore, investigated the rocks and seaweed, explored the driftwood and splashed in and out of the water. 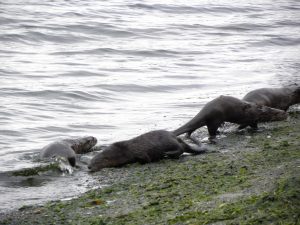 When they arrived at Wolf Hollow in June and early July the kits were about 3 months old and had been orphaned or become separated from their mothers. Each was found alone in a different place, but they quickly became inseparable and swam together, fell asleep on top of each other and learned how to catch live fish and crabs.  By fall they were well grown and ready to tackle life in the wild.