Where do young Harbor Seals go when we release them back into the wild? Do they stay in the area for days or weeks and join other seals on the local haul-outs, or do they head off for parts unknown?  We didn’t know the answers to these questions until we were able to follow the movements of some of the young seals we released in 2010.

In a project funded by a federal grant, Wolf Hollow collaborated with the SeaDoc Society to place satellite tags on 10 young seals when we released them in fall 2010. SeaDoc and Washington Department of Fish and Wildlife also placed tags on 10 age-matched wild pups so that the movements of the two groups could be compared.  The glue-on tags are intended to stay on the seals until they molt, so they can be tracked for several months post-release.

To take a look at maps showing the seals’ movements visit the SeaDoc Society’s web site at http://www.seadocsociety.org/harbor-seal-rehabilitation-study.

The seals we tracked were all brought to Wolf Hollow as pups that were orphaned or separated from their mother.  Most were thin and dehydrated and many had wounds or infections.  Their care involved treatment of injuries or infections, a nutritious diet so they could grow and recover, and pools where they could swim and gain strength in preparation for release.

Tracking – Snowberry moved around in San Juan Channel, between San Juan, Lopez and Shaw Islands for some time, then moved out into the Straits of Juan de Fuca. His last known position was half way out the straits on Nov 22 nd.  He was tracked for 62 days and traveled 601 km. 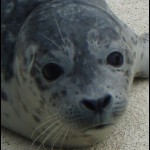 Tracking – Dogwood stayed within a short distance of the releases site on the E Side of San Juan Island for a few days, then hung out in Haro Strait between San Juan and Vancouver Islands before heading out the Straits of Juan de Fuca.  His last recorded position was off Cape Flattery, at the NW tip of the Olympic Peninsula on December 12th.  He was tracked for 82 days and traveled 322 km. 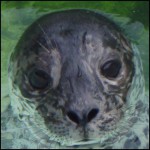 Tracking – Phlox spent time on the east side of San Juan Island, took a short trip east into Skagit County, then spent time off the west side of San Juan Island. From there he moved over towards Vancouver Island, took trips up the east coast of the island, out the Straits of Juan de Fuca and back,and was last recorded on December 6th 2010 near the east side of Vancouver Island north  of Victoria. He was tracked for 69 days and traveled 504 km.

Tracking – Luina spent a few days in San Juan Channel on the east side of San Juan Island, before moving over towards Vancouver Island and up into the Canadian Gulf Islands. She then took a trip down into Hood Canal, then up the east side of Vancouver Island, before heading out the Straits of Juan de Fuca. She was last recorded on December 3rd 2010, several kilometers off the outer coast of the Olympic Peninsula. She was tracked for 66 days and traveled 763 km. 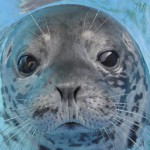 Tracking – Iris took a long trip way down into Hood Canal, returned to San Juan Channel, then traveled to the east coast of Vancouver Island.  Her last know position was off the west side of San Juan Island on November 27th 2010. She was tracked for 56 days and traveled 381 km. 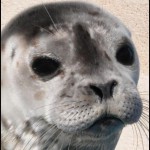 Tracking – Honeysuckle spent some time in San Juan Channel, took short trips over towards Anacortes and Vancouver Island, then traveled a long way down the outer coast of Washington and Oregon. Her last know transmission was on January 20th 2011 from around the Tillamook area on the Oregon coast. She was tracked for 110 days and traveled 690 km.

Tracking – Nootka spent several weeks within a relatively short distance of the release site on the east side of San Juan Island, before heading out the Straits of Juan de Fuca. Her  last know position was on December 12th 2010, in the Port Renfrew area, on the SW shore of Vancouver Island. She was tracked for 80 days and traveled 231 km.

OCEANSPRAY
History –Seen alone on shore of Skagit Island, picked up by member of the public and taken to Anacortes.  Fish and Wildlife officer picked up and sent to Wolf Hollow on 7/25.
Condition – Age ~ 8 days, Sex-Female, Weight – 14.3 pounds. Emaciated and dehydrated. Blood on face. Umbilicus badly infected.
Released – 10/19      Weight – 50.4 pounds.

Tracking – Oceanspray spent a few days near the release site before taking a trip down to the  northwest shore of Whidbey Island, then traveling north along the mainland coast, past Bellingham and up into Boundary Bay in British Columbia. Next she took a long journey up the Strait of Georgia, all the way up among the islands between Vancouver Island and mainland BC, before returning south to the Canadian Gulf Islands. Her last know location was near the north end of Galiano Island on December 12th 2010. She was tracked for 54 days and traveled 478 km. 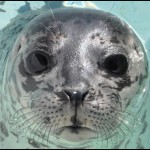 Tracking – Vetch spent only a short time near the San Juans, before heading up into the Gulf Islands then across to the shore of Vancouver Island. From there he traveled out the Straits of Juan de Fuca and hundreds of kilometers up the outer coast of Vancouver Island. He spent several weeks in the area north of Brooks Peninsula Provincial Park and his last recorded position was in this area on January 5th 2011. He was tracked for 78 days and traveled 671 km.