In 2000, after years of planning, designing and raising funds, we completed the construction of an Eagle Flight Enclosure. The enclosure was 140 feet long, 24 feet high and 20 feet wide. This provided enough space to allow large birds such as Bald Eagles to fly and condition their muscles before being released into the wild. A number of eagles, large hawks, and even an occasional Great Blue Heron made good use of the enclosure over the next few years. It proved to be a very valuable addition to our facilities and also of regional value, as one of only 4 large flight enclosures in western Washington.

The design and construction of this enclosure was made possible by grants from Summerlee Foundation and San Juan Community Foundation and donations from Roger and Claudia Salquist, Margaret Walkky, Jean Scott, Tom Metke, Dovetail Builders, Christensen Networks and Orcas Power and Light Co-op. 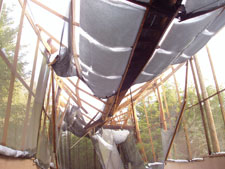 In November 2006, a foot of wet, icy snow collected on top of the enclosure overnight causing the roof to collapse, severely damaging the supporting beams and posts. Though snowfall was taken into account during the design process, and the eagle flight enclosure had survived other snow storms, this storm was unusual because the snow was so icy it did not fall through the netting, resulting in a tremendous weight bearing down on the structure. In fact, this storm led to the collapse of a number of structures in western Washington. 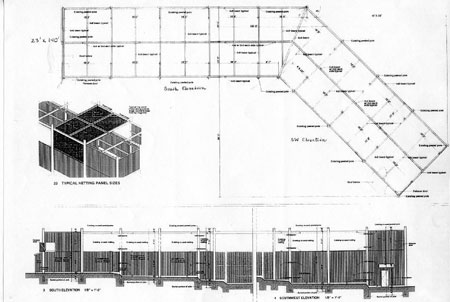 During 2007, we worked with local engineer Tom Metke and architect David Waldron to redesign the eagle flight enclosure to prevent snow/ice damage in the future. The enclosure will be the same size and shape as the original structure, but will have some design improvements. In the new enclosure, the roof panels, comprised of netting and framing, will be attached in a way that allows them to be easily lowered (so that snow and ice can’t build up on them) and then raised again. Wolf Hollow staff will be able to lower panels in advance of an impending snow/ice storm, to prevent potential damage to the structure from heavy snow /ice load. In addition, the panels will be attached to break-away devices that will cause them to automatically lower when a pre-determined weight of snow/ice bears down on them, protecting the structure in the event of a storm that is heavier or more server than anticipated. 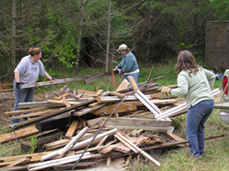 In March 2008, disassembly of the enclosure was completed. We plan to salvage as much of the lumber as possible for reuse in this or other projects. We can reuse the netting and most of the telephone poles.

Redesign and disassembly of our Eagle Flight Enclosure would not have been possible without the generosity of Horizons Foundation, Polar Tankers, Kaiser Family Foundation, Tom Metke and David Waldron and other supporters who donated funds or their time and expertise. Thank You!

Reconstruction began on October 4th, 2008 with a Volunteer Work Party to sort the old materials and clear the site ready for the construction crew to begin. We salvaged as much material as possible, but sadly, some could not be reused.

From October of 2008 through June 2009, the crew of Peter Schmidt Construction Inc. worked long, hard hours to rebuild this vital feature for our facility.
Reconstruction was completed by June of 2009 and the first eagle was moved into the enclosure.

The final cost of construction of our new Eagle Flight was $56,700. This is in addition to the $19,428 cost of deconstruction of the previous damaged enclosure, salvaging materials, permit fees and architect and engineering work that took place in 2008.

We would like to say a huge THANK YOU to everyone who made it possible for us to rebuild this essential part of our facility. This includes the following foundations, companies, families and individuals who provided grants or donated funds to cover the construction costs.

During the time that we were building this enclosure, we recevied generous bequests from the estates of several individuals and decided to put some funds from each of these towards the construction of the Eagle Flight as a lasting legacy from these caring people. Each eagle that is released from this enclosure will be our tribute to Anna Jane Miller, Marion Kline, Betty Scott, Joan May and Elizabeth Burton.

Our final thank you goes to all the people at Peter Schmidt Construction for their hard work building the enclosure, their patience and attention to detail on the “unusual” project and for using their experience and ingenuity to help us find solutions to challenges along the way.