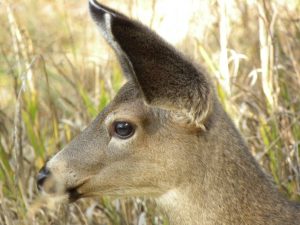 In early April people began seeing sick and dead deer on the islands. This was reported to local authorities who then informed Washington Department of Fish and Wildlife (WDFW). Samples were collected and by late May the cause had been identified as Adenovirus Hemorrhagic Disease. This disease only affects deer and does not affect other wild animals or livestock. Sadly, there is no cure or treatment for the disease, which is often lethal, especially in young fawns. Symptoms of the disease include open-mouthed breathing, foaming from the mouth, weakness and emaciation, but some deer, especially young fawns, can show no symptoms then die very suddenly.

Anyone on the San Juan Islands who sees live or dead deer with signs of AHD (including heavy foaming from the mouth, bleeding from orifices etc) is asked to report their sightings online through the reporting link on Washington Department of Fish and Wildlife’s web site. https://wdfw.wa.gov/species-habitats/diseases.