Our first Harbor Seal pup of 2020 arrived at Wolf Hollow on May 31st. This is 3-4 weeks earlier than we usually see seal pups at the rehab center, because she came from Ocean Shores on the Olympic Peninsula where pupping season is earlier than it is around the San Juans. 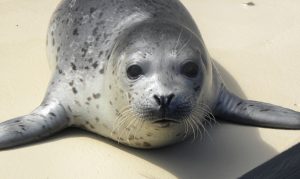 She was seen alone for several days, and over the busy Memorial Day weekend, was constantly harassed by people trying to take photos or get her back into the water. A Washington Department of Fish and Wildlife biologist rescued the pup and took her to a vet clinic for initial care. When she arrived at Wolf Hollow, we discovered that she was emaciated (only weighed 14 pounds), dehydrated, had wounds on her flippers and had an umbilical infection, but she was active and had a very loud voice.

She started off in our seal nursery, being fed a special high-fat formula while she regained her strength, but has now progressed to swimming in a pool and learning to eat fish. Our naming theme this year is scientists, so she was named Fossey, after Dian Fossey, the American primatologist famous for her valium research on Mountain Gorillas.