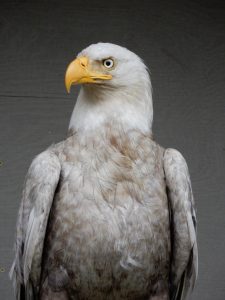 Have you ever seen a Bald Eagle that looks like this?  In our 36 years of operation, we had never seen one with such pale cream/brown body and wing feathers.  A bird like this is described as Leucistic. The pale coloration is a result of partial loss of pigmentation in the feathers. Its eyes and feet are the normal color, but the feathers are very pale.

This eagle was seen sitting on the ground in a field in Skagit County. One of our Animal Transport Volunteers was able to capture it and send it over to Wolf Hollow. In addition to its unusual color, there were other mysteries about the bird. It had a bulging crop, so it had just eaten an enormous meal, the feathers on its underside were matted and oily with what smelled like fryer oil, and it had swelling around one elbow. What had it been up to?

Luckily the wing injury was minor, so after a day to digest its meal we gave it a bath to clean the oily feathers and were able to move it into an outdoor enclosure. It quickly progressed to flying further and up to higher perches, so after just 6 days in care, the eagle was sent back for release. I’m sure many people were glad to see this distinctive bird back in its home area again.